San Antonio-based precast concrete double tee beam manufacturer, NAPCO, constructed two parking garages for the upscale Cool Springs condominiums near Dallas in 2004. The condominiums are about 30 minutes north of the DFW Airport, less than 1/2 mile from the home of NHL hockey team, the Dallas Stars and AA baseball stadium.

Concrete double tee beams are produced with metal inserts in the flanges, so the beams may be connected to one another after being placed. The connection is typically completed with welded metal clips that are anywhere from 6ft-8ft apart. Most double tee beams are 60 ft. in length, as are the ones used to build the two garages at Cool Springs. These clips/connections are important as they allow the concrete beams to flex together as cars/trucks move across the deck. It is common for these welded connections to break due to rust, fatigue, overloading or a combination of all three. Many of the clips on the double tees at the Cool Springs garages were breaking prematurely. In this case, the clip was breaking behind the inserted metal plate, which is unusual.

NAPCO decided it'd be best to go ahead and replace practically all of the clips in both of these garages. Many of the flange to flange connectors were broken and the beams exhibited excessive movement with traffic. Over 2,500 V2 CFRP Tee Biscuits were installed to correct the problem. The V2 CFRP Tee Biscuit System is a recently patented product that is a carbon fiber plate, made from custom designed carbon triaxial fabric manufactured at V2 Composites' facility in Auburn, AL. The pre-laminated plates are inserted into a slot that is cut from the top of the beams, 90 degrees across the joint. The plate is shaped to mimic the curve on a 14" diameter saw that is used to make the cuts. The slot is then cleaned out and V2's 2 part epoxy Biscuit Bond Paste is inserted into the slot and then onto the biscuit surface. Large scale testing on this system was recently completed showing more capacity than metal systems. 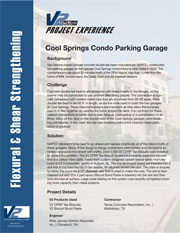